This is a step-by-step tutorial for deploying a Java Microservice to Kubernetes using the open source cloud native deployment tool, Ketch. The resources for downloading, installing and contributing to the project are at the end of this blog.

For more than 20 years (well before microservices and Kubernetes), Java has consistently been one of the most widely used programming languages.

The early attraction of Java was its promise of “write-once, run anywhere.” In theory, this portability should allow a developer to write code that will run unmodified on any platform.

However, we now see the ecosystem moving towards cloud-native technologies such as containers, and teams are building applications that are more modular and distributed to make them easier to scale. This changes the approach to developing, deploying and expose applications quite a bit.

Thus, the scenario we currently see is developers trying to learn how to deploy their Java applications using containers and Kubernetes as the container management platform with the goal of achieving things such as increased resilience, scalability, and more. Still, as they get started in their microservices journey, they realize it is not as easy as expected.

When deploying a Java application using a microservices architecture on Kubernetes, they learn that it is no longer only about their application code. Now, to deploy and give users access to their applications, they need to understand concepts such as replication controllers, pods, services, load balancing, and more, which previously were seen as infrastructure-related components and handled by the System Admins. This adds complexity and delays on the application delivery process and negatively impacts developer experience.

Given the current scenario, Ketch focuses on helping developers focus on what matters the most to them–their application code–while automating infrastructure-related tasks.

For our example, we will be using a sample Java application called WildFly.

If you were to deploy this application on Kubernetes, without Ketch, you would need to:

Creating the above can be time-consuming. Managing these configurations as your application changes can introduce additional complexities such as understanding how to choose between NodePort vs. ClusterIP, for example, and more.

With Ketch already installed, the first step is to create a pool, which translates to a namespace in Kubernetes, where you will deploy your WildFly application. You can do it using the command below:

* Keep in mind that you will need to update your ingress service endpoint IP with the one from your cluster, which you can find by running the command below:

You can see your pool was successfully created by running the command below:

Now, you create your application where the WildFly application image will be deployed next:

The last step is for you to deploy the application image:

You can see detailed information of your application status and the URL that was automatically assigned to it using the command below:

If you navigate to the URL presented, we can then see the web UI for the application: 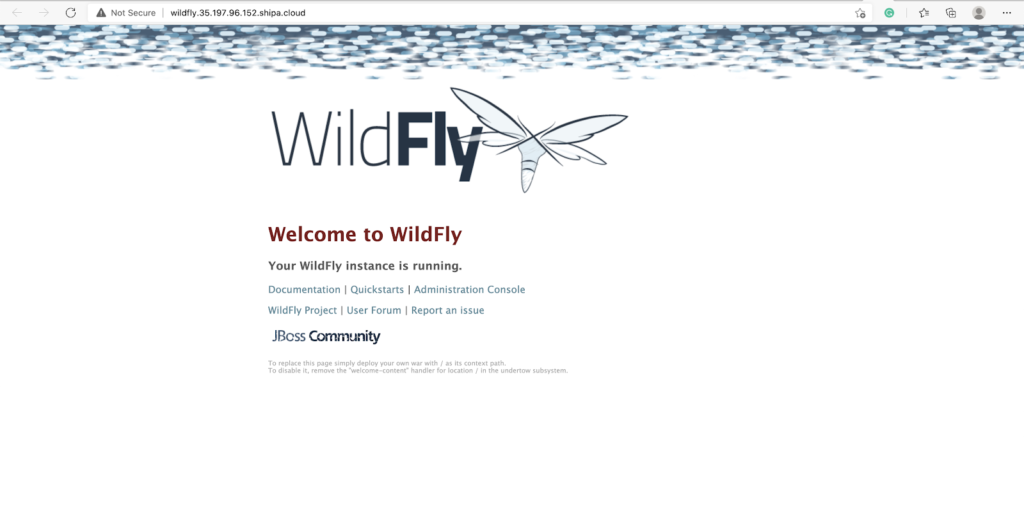 Using Ketch, you saw that instead of spending a large amount of time learning the different Kubernetes concepts, you can deploy your Java Microservices application using three simple commands.

Tray Ketch today, and join one of the fastest growing open source projects in the cloud native space!